— Written By Chris Gunter and last updated by Brandon Hopper 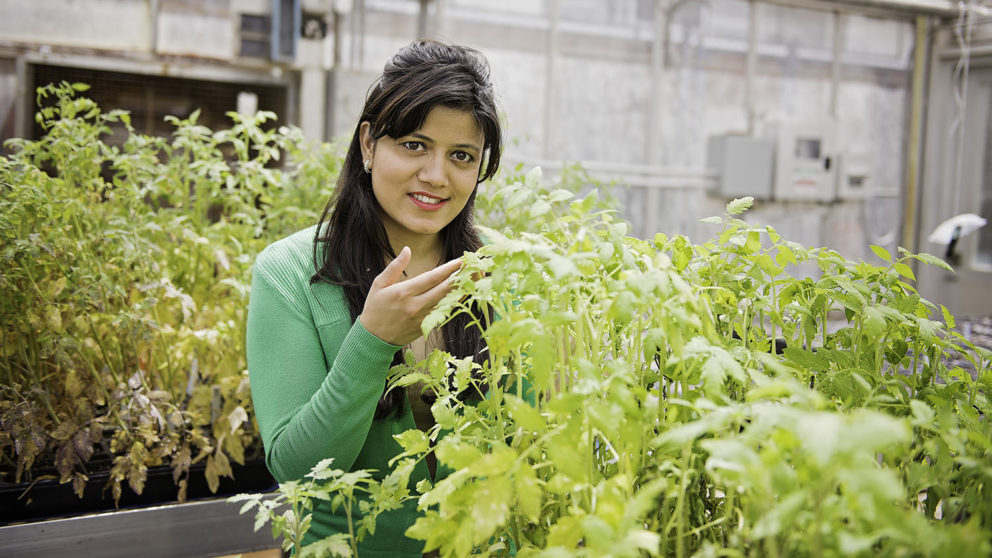 Gorgeous but tasteless: A tomato is a tomato, right? Wrong. Can NC State researchers restore that sunshine-in-your-mouth tomato goodness?

American tomatoes have a problem, says NC State doctoral student, Pragya Adhikari. The fat, juicy and delicious taste has been bred right out of them. They may appear larger and firm—and more plentiful—but increasing yields did not correlate with good flavor.

“The flavor in a tomato, the gene that controls the flavor, is not one gene but many, many genes” she explains. “As breeders tried to breed them for size, weight, firmness, the tomato would be  hardy.” But, as she explains, the genes that contribute to flavor were lost. “We didn’t lose it all at once, but one by one while breeding for other traits; if we compare the commercial tomatoes with the heirloom, the taste is much different.”

As far back as 2012, National Public Radio, NPR, decried a decline in flavor. For many of us, anticipation of a sloppy and flavorful “kitchen sink tomato sandwich,” of White Trash Cooking fame, spells summertime.

As with many things, taste is subjective. But the science of flavor is not. The flavor of tomato is a result of interactions of sugar, acids and many volatile chemicals. University of Florida researcher Professor Harry Klee has compared commercial and heirloom tomatoes. “His group quantified flavor-associated chemicals in modern heirloom, and wild accessions. What they found is, there are so many flavor chemicals missing in commercial tomatoes compared to heirloom tomatoes,” says Adhikari. (See sidebar on sensory taste panels.)

“Flavor phenotyping is difficult and expensive, so most of the breeding programs are focused to improve other traits such as disease resistance, yield, fruit size, and firmness,” says Adhikari.

Can we do it? Can we lovers of tomatoes puhleaze get back flavorful, juicy tomatoes?

Yes, Adhikari reassures. “We can do it through the molecular breeding approach. Dr. Klee’s research group has also identified the genetic loci controlling the biosynthesis of some of the volatile
compounds lacking in modern tomatoes through whole genome sequencing and genome-wide association study. Through breeding, we can restore these flavor volatile chemicals by selecting for
the genetic loci controlling their biosynthesis.” Another emerging technique is through genomic selection, which is more popular in wheat and corn. But of course, she adds, genetic engineering is
a testy matter for a leery public. “Although, she says thoughtfully, “Flavor Saver tomato is the first commercially grown genetically engineered food approved for human consumption.”

But in order to avoid genetic engineering due to regulatory issues, researchers are focusing on crossing of commercial tomato lines with a good flavor line. It is a more tedious and time consuming
process, but the public is more accepting of cross-breeding.

“In Nepal, my home, they have temporarily banned GMO,” Adhikari notes.

But the problem for the tomato doesn’t end with flavor. The problem extends to something called bacterial spot disease, something that is her research focus.

“It is a very serious disease caused by at least four species and four races of Xanthomonas. This disease affects all aboveground parts of tomato plants,” she explains. Tomatoes are largely grown in the western part of the state. Top production areas are counties in western North Carolina and in the Piedmont.

Growers have difficulty managing bacterial spot disease in their fields. Lacking a commercial resistant cultivar, growers rely upon copper spray and streptomycin for management of this disease.

During a field trip to western North Carolina, the researchers collected symptomatic leaf samples from different fields for assessing bacterial spot strains. “We found that almost all bacterial isolates are resistant to copper,” Adhikari adds, which means they are resistant to one of the two methods currently used for treating them.

“There is not a commercial cultivar, but we breed the wild resistance with the cultivated to make a disease-resistant line. As the disease is caused by multiple species, breeders are trying to pyramid all resistant genes against multiple species in one plant.”

The disease problem was first detected in the 1980s. According to Adhikari, bacterial spot of tomato is distributed worldwide with distinct distribution of each group or race. Significant losses have been reported from Michigan and Ohio and also from Florida, all due to bacterial spot. She is searching for which race of Xanthomonas is dominant in NC, so as to breed tomatoes accordingly against that race. “The disease is seed borne. One infected seed has a potential to cause high disease incidence in a commercial field. The detection limit is one in ten thousand seeds.” The same problem exists in Nepal, she says. A different race of tomato is grown there, yet the problem is worldwide.

Adhikari is now assessing the bacterial spot isolates of North Carolina for diversity analysis, race profiling and sensitivity to copper and streptomycin. “After we know which race is dominant in North Carolina, we can breed accordingly against that race. My research will contribute a small amount. We are looking for a section in the DNA controlling bacterial spot disease resistance.”

It takes around 8-10 years to release a new tomato variety.

“My research focuses on detecting QTL (Quantitative Trait Loci) underlying bacterial spot resistance in tomato.” She will continue this over the next two years as she completes her research,  working with her principal investigator, Dilip R. Panthee, a tomato breeder and associate professor of horticultural science at NC State and Frank J. Louws, plant pathologist, professor, and director of the Center for Integrated Pest Management at NC State.“I can identify it (bacterial spot causing pathogen-Xanthomonas spp),” Adhikari says, “I can distinguish it from other pathogens by culturing the leaf lesions into a growth medium.”

Getting a disease-free tomato is a problem when you consider the complexity of the disease, she admits. (Having formerly worked with grapes before coming to State, Adhikari says the research techniques for grapes are the same as for tomatoes.)

“In 2000, growers had a problem of bacterial speck of tomato, a different disease caused by a different pathogen, but now, we have a problem of bacterial spot of tomato, indicating an ecological shift of pathogen. If we look at the bacterial spot causing pathogen, races of the pathogen are also changing from year to year. We are expecting race T4 to be dominant in North Carolina. One of the objectives of my research is to confirm the dominancy of race T4 in North Carolina.”

With the advent of heirloom tomato growers and loyal seedsavers, it is possible to find many of the heirloom tomatoes that may be gnarly and oddly shaped or even oddly colored. Their heirloom names—Cherokee Purple, or Mortgage Lifter—are as colorful as the more perfect alternatives are in reality. But it is in their imperfection that we find what is missing: heirlooms possess the flavor we crave.

Back in 2012, NPR interviewed Eric Rice, owner of Country Pleasures Farm near Middletown, Md. He told NPR how he first experienced heirloom tomatoes while a graduate student in North Carolina.

“I decided I really liked them” Rice said. In their gnarly form, he found perfection in imperfection.